This manual for a Hermes 2000 typewriter, written in French and produced for the Swiss-French market, came with a mint green Hermes 2000 with leatherette case that we acquired (and subsequently parted ways with) last summer. I did not write down the serial number, but I remember looking it up at some point and finding out it was manufactured in 1956. To refresh your memory, here is the typewriter in question: 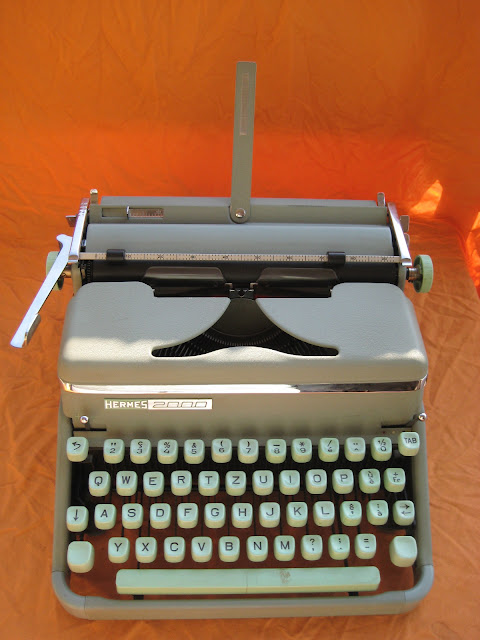 To save some time and avoid repetition, I am reproducing here the pages of the manual that show the Hermes 2000 pictured. Other mundane instructions, such as how to change the ribbon/ use the space bar will be omitted as they are virtually identical for every typewriter. 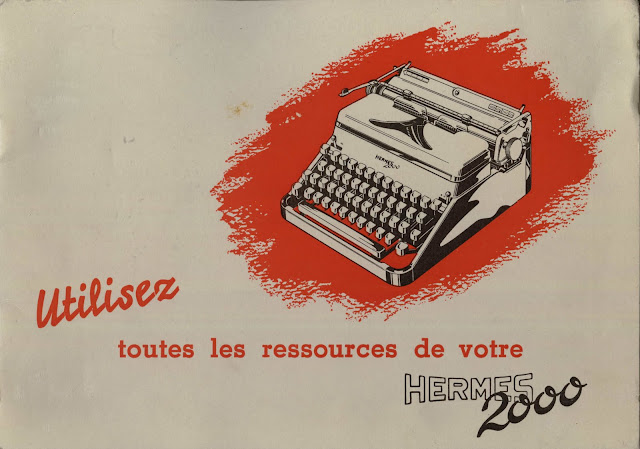 Like the Triumph Tippa manual I shared earlier, the manual for the Hermes 2000 is also in the form of a pamphlet. The front cover, shown above, reproduces the Hermes 2000 logo that is not used on the typewriter above, but appears on this one. 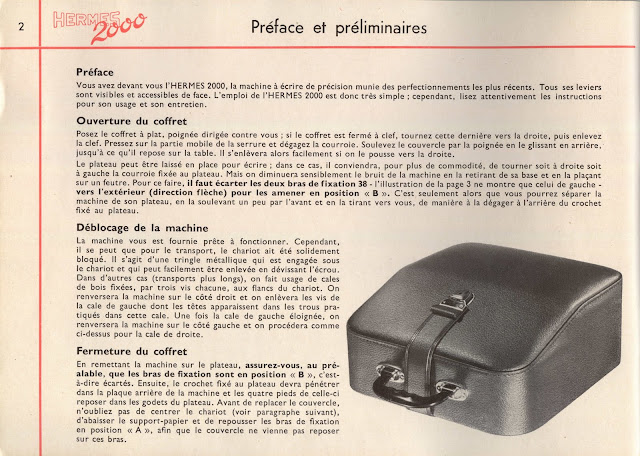 The second page goes on at great length about closing and opening the handsome leatherette case that came with the later versions of the Hermes 2000, as well as unlocking the machine for the first time after it leaves the factory. 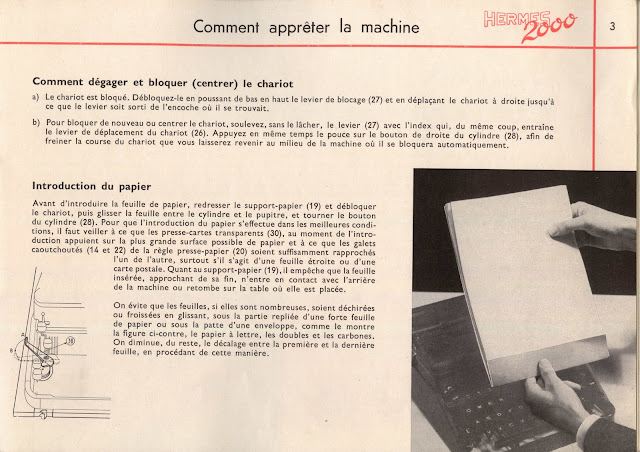 Here, we get detailed instructions on how to feed in the paper. 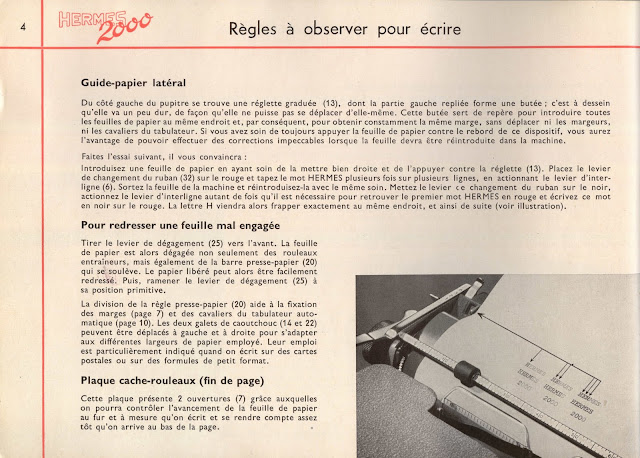 Correcting the alignment of the paper 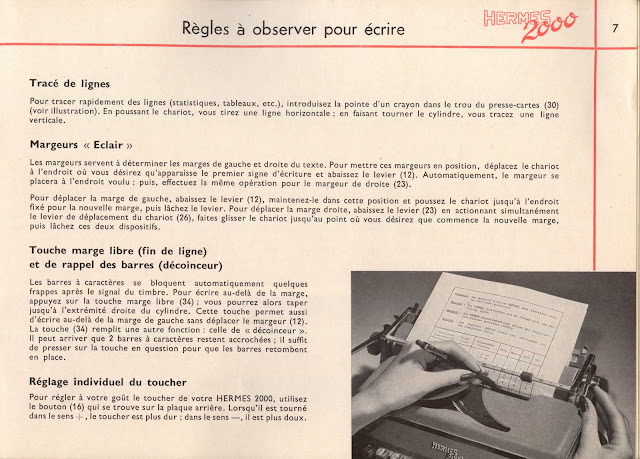 Now, this is interesting - I've never actually tried to make columns and draw lines with my typewriter, but I suppose it's comforting to know I could do so if I needed to. 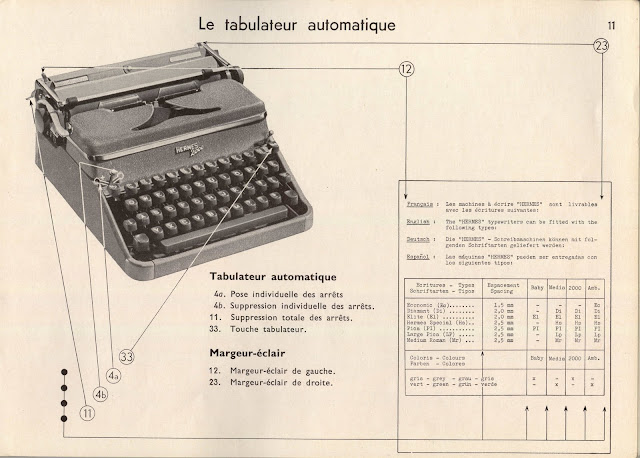 The "flying margins" that would later appear on the Hermes 3000 with red ribbon indicators are also present on the Hermes 2000 in an earlier version. Using the margins is just as complicated, like tying your shoelaces in the dark. This page also shows the tabulator (oops, all this time I thought it was a touch control regulator), and presents a list of the type styles that were available when this was printed: Economic, Diamant, Elite, Hermes Special, Pica, Large Pica, and Medium Roman. In terms of color, the Hermes 2000 seems to have been available in green only, and the Hermes Baby in gray only. 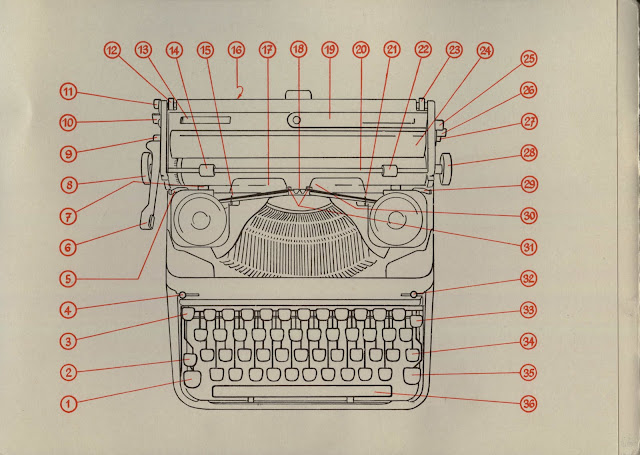 A labeled diagram of the machine (with ribbon cover removed)  folds out from the last page of the instruction manual. 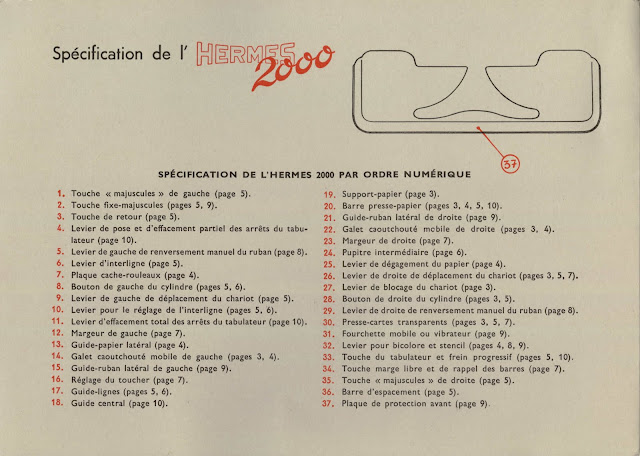 Parts named - in case you ever wanted to know what to call the various typewriter parts in French! 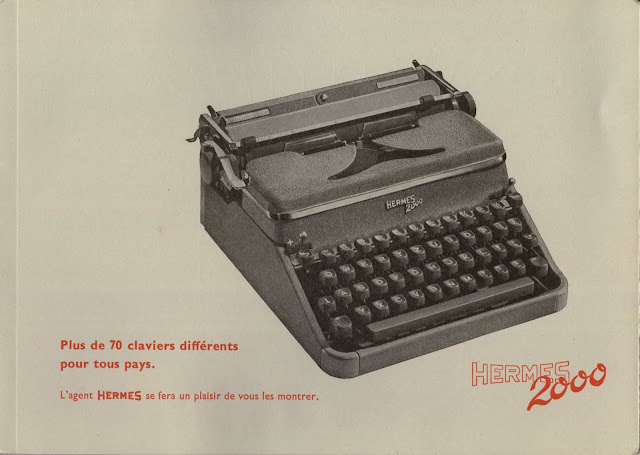 Back page - don't forget to call your agent for a demonstration! 70 keyboard layouts available for all countries!
Posted by Adwoa at 9:37 PM
Labels: Hermes, Instruction Manuals