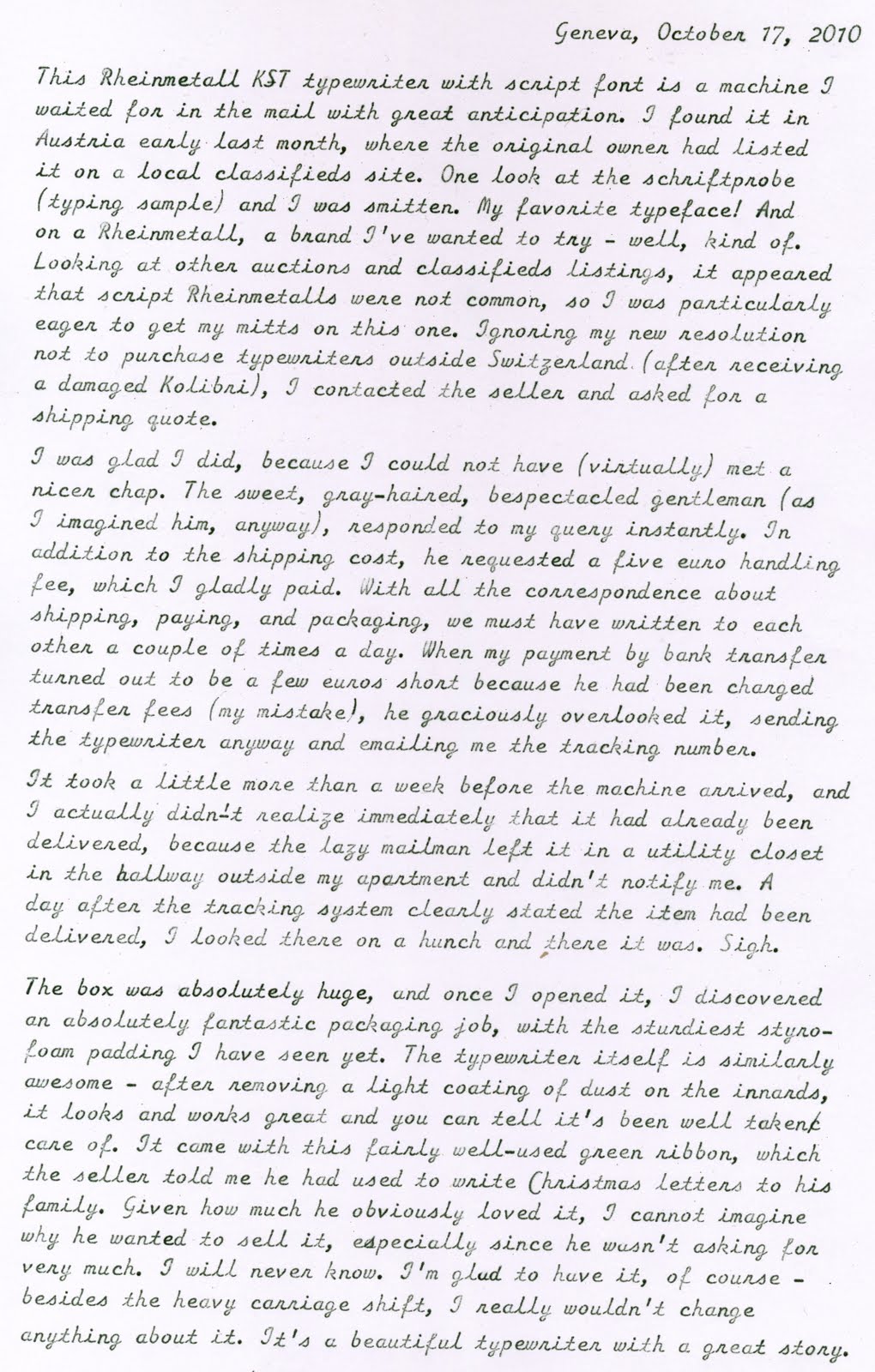 This is a typewriter I've been wanting to share on the blog for some time now, so I'm excited that I finally got around to it today. I like almost everything about it - Rheinmetall, like Voss and Alpina, is more of a "collector's typewriter" than a "writer's typewriter", so it is nice to have it as a showpiece that is also perfectly functional if I so choose. However, primarily due to that carriage shift, it is not as finger- and wrist-friendly as your average Hermes 3000 or Olivetti Lettera 32. Here are some pictures: 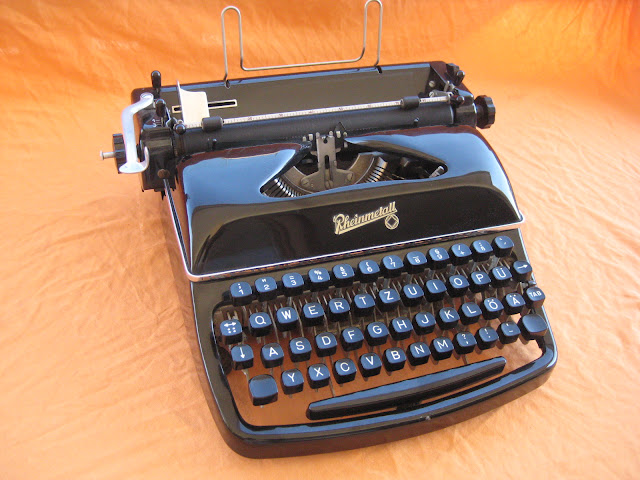 It was just about impossible to take a head-on picture without having my mug reflected in the glossy ribbon cover, so this was as close as I got. 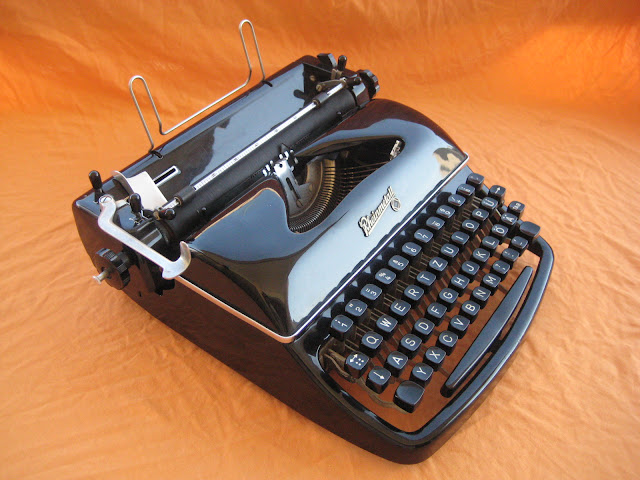 This was straight out of the box, before I cleaned it, if you can believe it. It's always a great feeling to get a machine from someone who obviously cared a lot about it. There was the usual grime/ eraser shavings sticking to grease on the interior, but a few minutes with some cotton swabs took care of that. 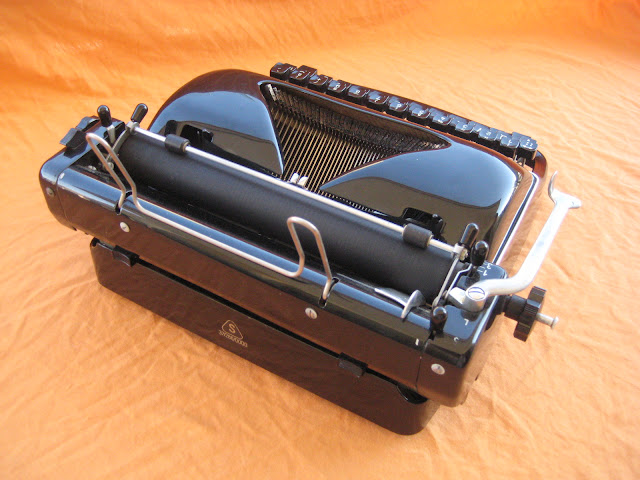 I like the ornate paper supports on these old machines. I looked up the serial number on this one and it's dated 1956. Which makes me think that perhaps I purchased this from the son of the original owner, because otherwise he would be very old indeed to be carrying large boxes to the post office! 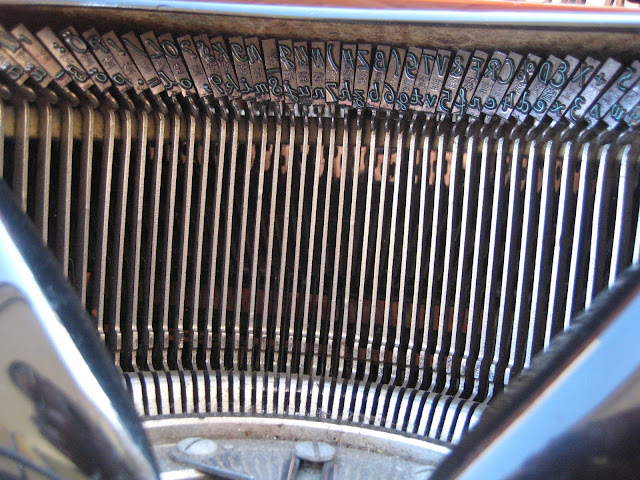 Here's a look at the script/ cursive typeface, lightly tinged with green from the ribbon (which didn't show up so well in the typecast, sorry). I wish I knew where to procure these colored ribbons! They're a treat to use. 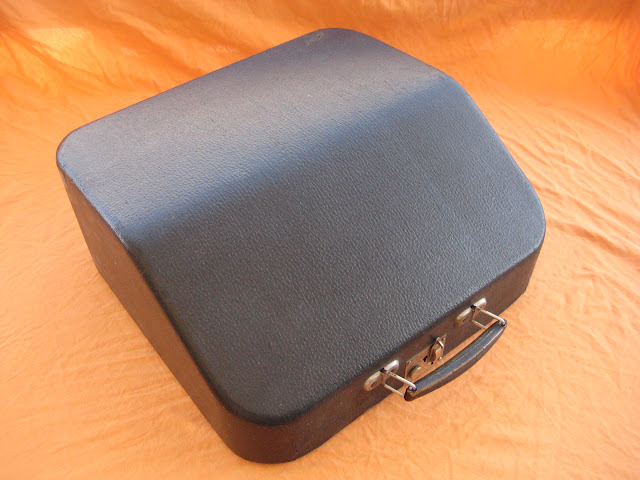 Here is the case, which is made of wood covered in leatherette fabric, and is in good condition considering its age. The bottom is a board on which the machine is fastened, and then the top closes over. I wish these old cases were more streamlined... I imagine once the typewriter is in the case, there is still quite a bit of room, unlike the almost-hermetic fit of the Hermes 3000.
Oh, finally, a look at that impressive packaging job: 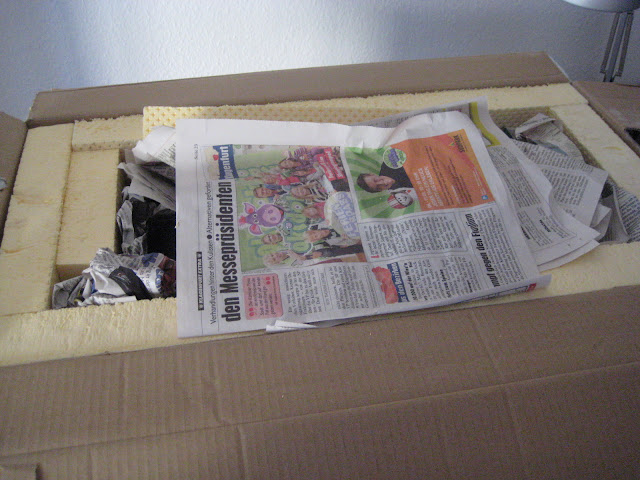 I saved the Styrofoam pieces and I'm using them to pack a Hermes 3000 that I'm sending overseas. Fingers crossed that the padding works its magic a second time!
Posted by Adwoa at 8:51 PM
Labels: Collection, Rheinmetall, Script/ Cursive, Typecasting