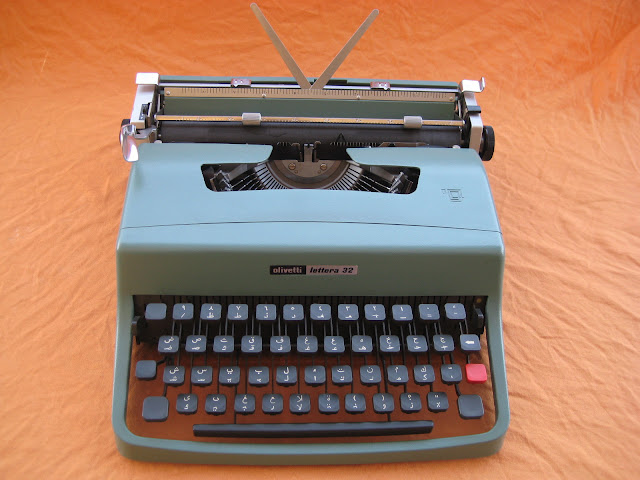 There are times when I have been able to tune out completely from current goings-on, staying immersed in my little world of eclectic hobbies - typewriters, papers, pens, ink, blogging, wondering whether it is a good idea to embark on yet another sourdough starter experiment. Engrossing stuff.

And then there are other times like the last couple of weeks, when major world events have kept me glued to my little screen, refreshing my news feed and the websites of major news outlets. First there was that hubbub about the "last typewriter factory" closing, which was mildly amusing. Then there was a wedding I didn't know I cared about, but ended up following keenly and even getting misty-eyed at parts. That was the best part. And now... well, this. Still, I've been meaning to post this little beauty for a while, so here we are. Besides, my post coincides neatly with Robert Messenger's celebration of Olivetti's hundred year anniversary! 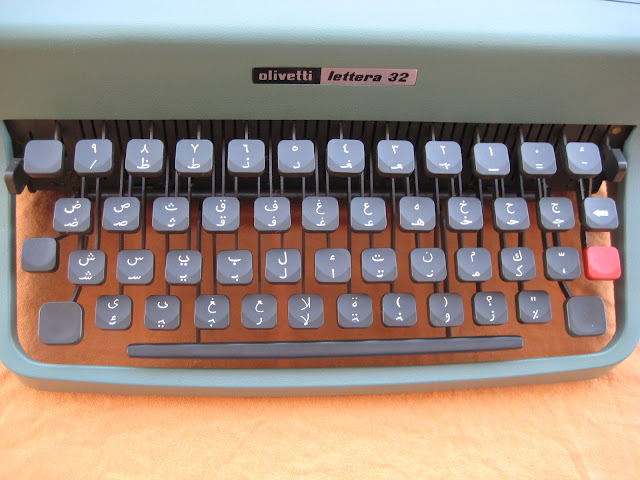 The week I salvaged the red Everest K2 was a very good week for me, as far as typewriter discoveries go. The very next day, I decided to stop by my local Salvation Army and see what was new. There I discovered not one, but two Olivetti Lettera 32s! Truth be told, I had been hoping to find a Lettera 22 to cannibalize for parts (ours has a broken return lever), and the excitement I felt at spotting the familiar blue striped case quickly faded when I realized it was "just" another L32. 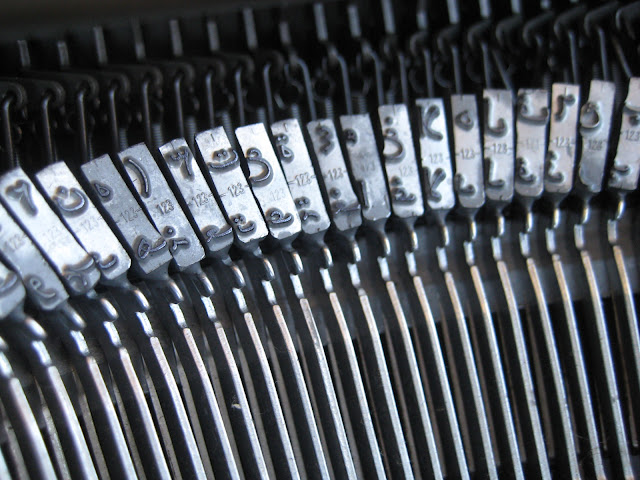 The first was nothing special: an unusable (for me) Italian qzerty keyboard, very dirty, missing case, ordinary pica font. The second looked odd. I peered in closer and discovered a pristine Lettera 32, zipper slightly separated from case (as usually happens with these models), and a very unusual keyboard. It did not take too long that I realized what I was looking at - Arabic! Very, very interesting. I have spotted a couple of Russian typewriters in the wild previously and they have evoked no interest, but this was the first Arabic typewriter I had seen outside of Mr. Perrier's museum. 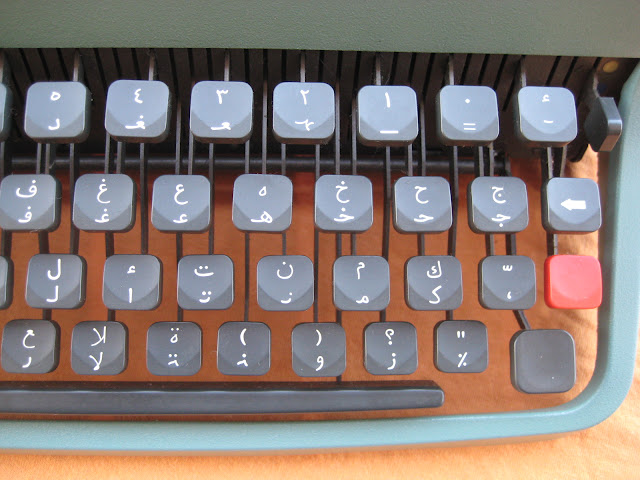 To tell you the truth, I wasn't exactly enthused at first. Here was this beautiful little specimen, quite unusual, pretty rare in Switzerland, an exciting find of course - but did it have a place in my "collection"? I already have a few machines sitting around waiting to be used, and I long ago resolved not to acquire typewriters I would not use - or intend to use - on a regular basis. This was the walking definition of impracticality! I do not know the language, and while the pretty script is all very well and good, it would serve little purpose for me. 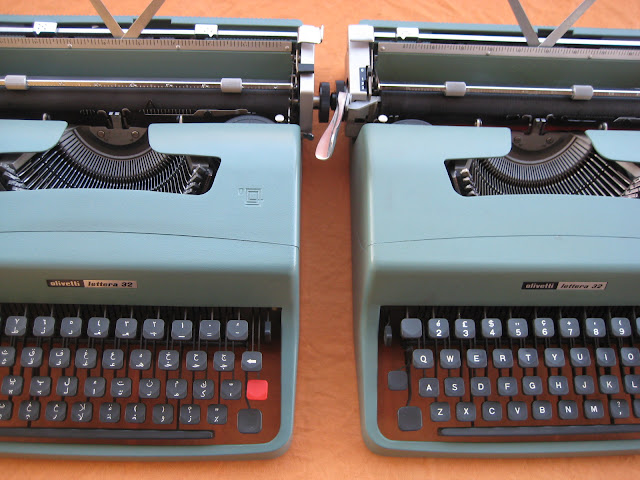 But I had to make a quick decision: the shop was closing when I walked in, and the assistants were already turning out the lights. I didn't want to leave, decide later that I wanted to give Habiba here another shot, and have to come all the way back to look for her (and find her gone, even worse). Besides, at the very least I thought it would make for a fun blog post, including a comparison of Habiba with our regular L32 pictured above (which we had also found unusual and worth acquiring because of the 'rare' qwerty keyboard). Afterwards, I could always contemplate giving Habiba away, like the Everest K2. 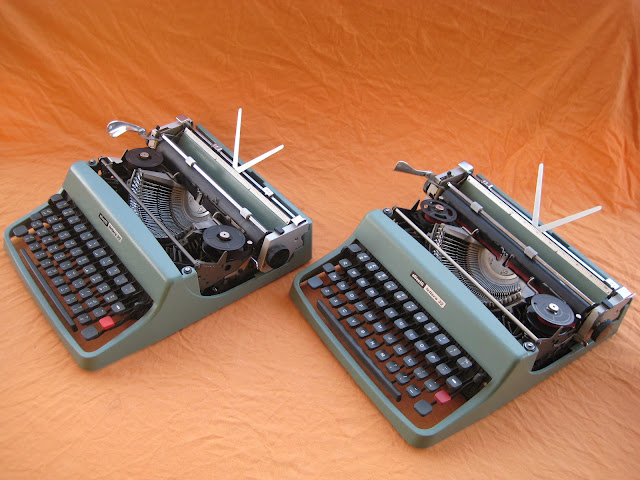 In terms of mechanism, the differences are obvious in use, and you can refer to Richard's post on his own Arabic typewriters to see some of his discoveries with his Erika 10 and Olympia SM-5 Arabic typewriters. 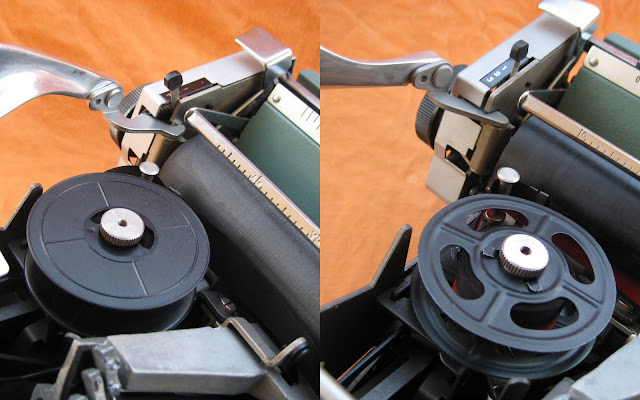 In the case of these Letteras, though, you will notice that they look virtually identical at first glance. It is a common misconception that Arabic typewriters will have the carriage return lever on the right, but as you can see, this is not the case. Olivetti solves the problem by flipping the lever pretty much upside down on the Arabic typewriter - instead of pushing it towards the machine, this one moves away from the typewriter. The parts are the same, just mounted differently: the Arabic lever forms an "L", and the qwerty a "_I" shape. 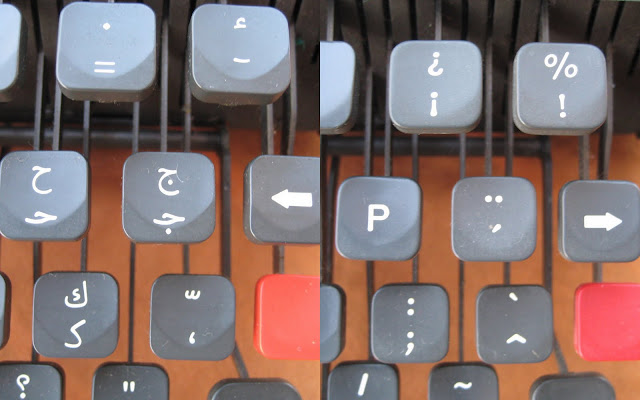 When the space bar on the Arabic typewriter is pressed, the carriage starts moving to the right. Consequently, the backspace arrow points in the opposite direction! 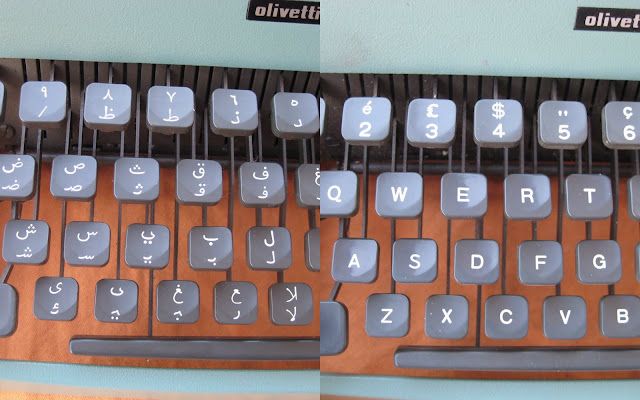 Other than these subtle changes - and the fact that the characters on the keyboard, type slugs, and paper table are all in Arabic - the two Letteras could be twins, and there is no indication that much was changed in the intervening seven years in terms of production methods. 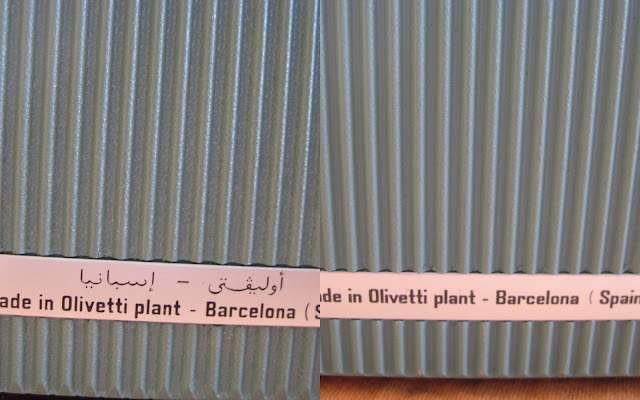 Both typewriters were manufactured in the Olivetti plant in Barcelona.

Conclusion: For ten bucks, I really have no complaints about this lucky discovery! It was fun to play with it, type some gibberish, and discover the mechanical modifications Olivetti included to make this suitable for Arabic speakers. I have a few ideas about who I could give this to - including a friend who learned to read and speak Arabic many years ago and visits Lebanon every year. I hope he will be amused! We'll see.
Posted by Adwoa at 4:52 PM
Labels: Olivetti/ Underwood