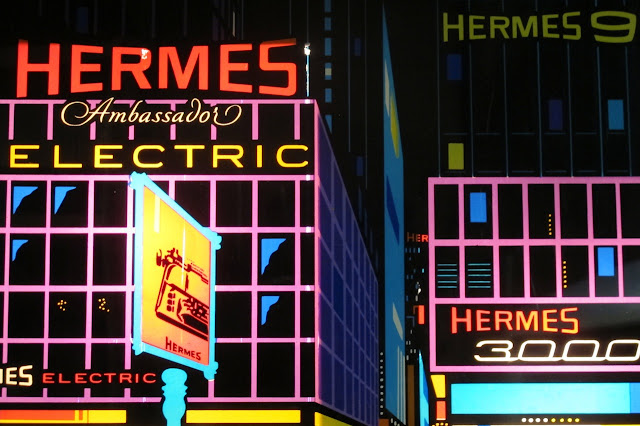 I have wanted to do a photo essay on Jacques Perrier's typewriter collection since I first visited in June last year, but during that visit I only took a cell phone camera. So, when Georg told me that he had scheduled an appointment to see the museum, I was eager to come along. In addition to typewriters, and a whole wall of Hermes machines, Perrier also has an impressive collection of ephemera, and the above picture is an excerpt from a large and brilliantly colored Hermes poster. 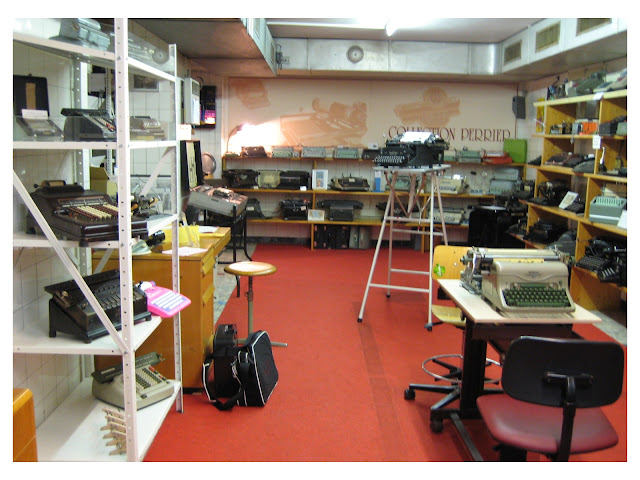 When we arrived for the visit on Saturday (a few minutes late after traipsing up Lausanne's infamous hills), Georg and I met and shook hands with Jacques. Mind you, I had already met him, taken the tour, written to him (both email and snail mail), and yet, his expression was inscrutable, so I couldn't quite be sure if he remembered. Ah, well. 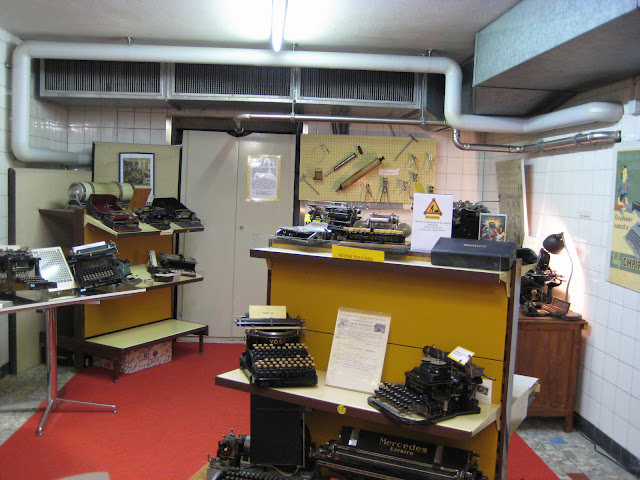 The museum itself is located in a windowless room, one floor below the ground. It is a rather small space, as Perrier points out immediately to visitors: it is only able to house 1/4 of his collection, the rest of it (about 1000 machines in total) kept in storage until such a time as he is given a grant from the Lausanne government to relocate in a bigger space. He cited 300 square meters as his ideal. 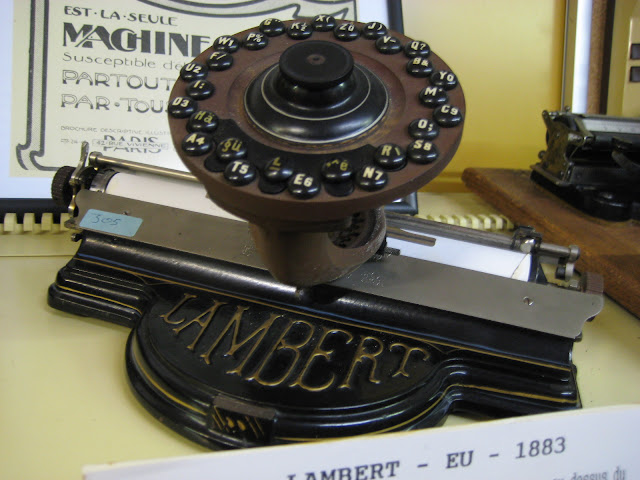 Before each tour, as ceremoniously as a priest donning his robes, Perrier shrugs off his jacket and puts on a blue overcoat with the Hermes logo stitched on the chest pocket. A laminated name tag identifies him as "Guide Jacques". We were in for the full treatment! He started off by pointing out the oldest typewriters, including a Lambert (shown here), a Blickensderfer, Edelmann, and so on. 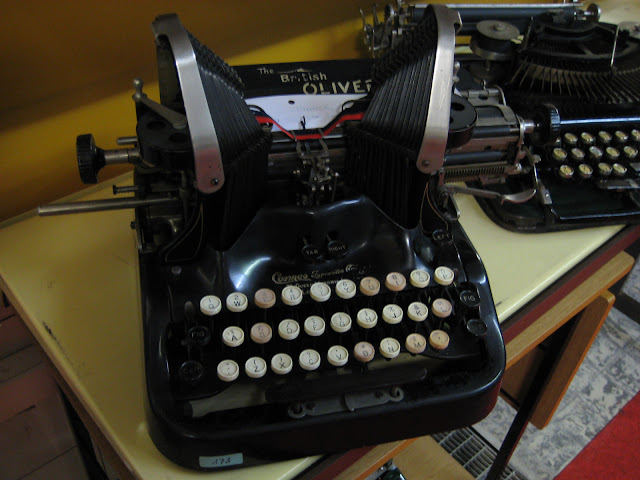 He demonstrated the typing action of several of the more unusual machines, including this British Oliver, a Bennett typewriter, a Yost 20, and a few Braille printers. 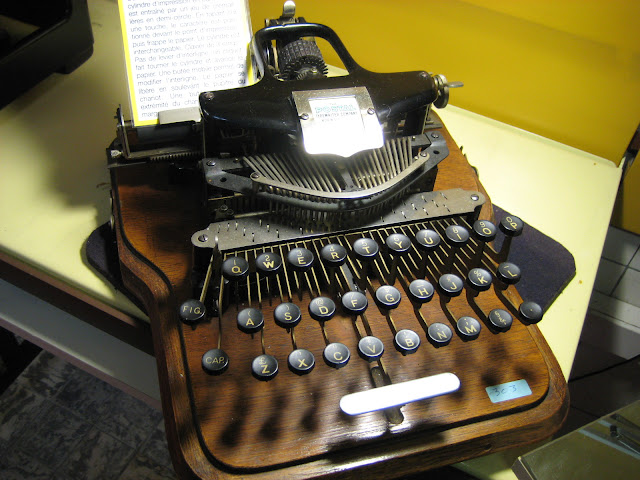 On this Postal typewriter, he pointed out the @ sign (on the letter D), the existence of which - so many years before the advent of email - surprises and delights museum visitors.

Most of the typewriters are in working condition, despite their age, having been fully restored. For the ones in which the rubber parts (mainly type pads) have cracked or otherwise deteriorated, Perrier has had special replacements made, which he showed us. 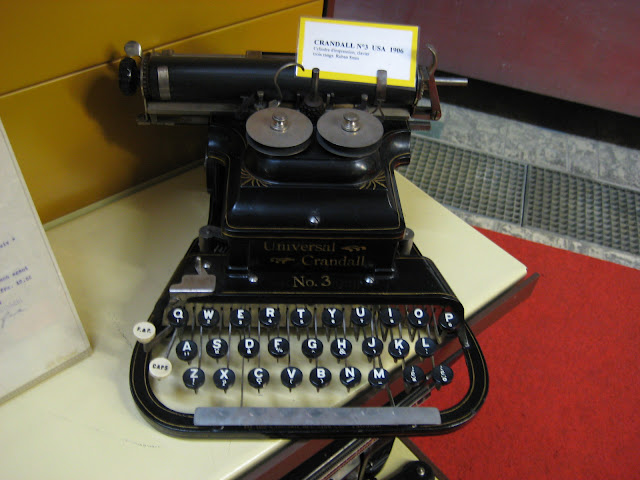 Like this Universal Crandall No. 3, each typewriter bears a small name plate identifying the year of production and country of origin. Many of the oldest ones have been in the collection for decades: Perrier's father sold and collected typewriters, a business which he passed on to his son and which focuses today on selling and repairing printers, photocopiers, and other business equipment. 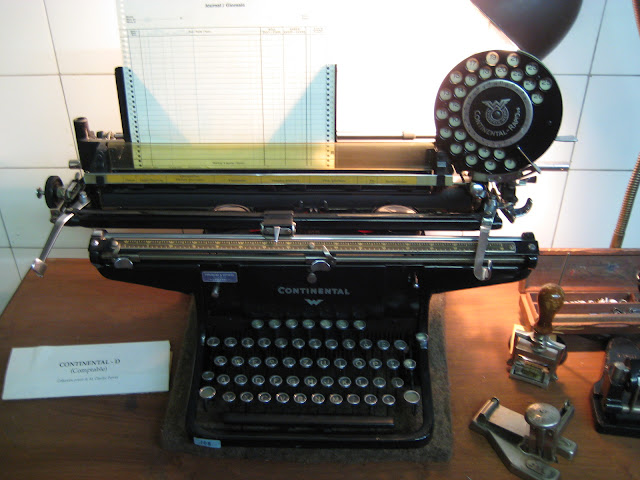 I have always been curious about these enormous Continental standards, which show up from time to time on local auction sites. Perrier explained that the large telephone-looking dial was used in conjunction with a special numbered sheet to move between the lines in order to fill in accounting figures. He demonstrated with the sheet inserted in the machine, but with the caveat that it was not the original one (it was marked "Ruf"). 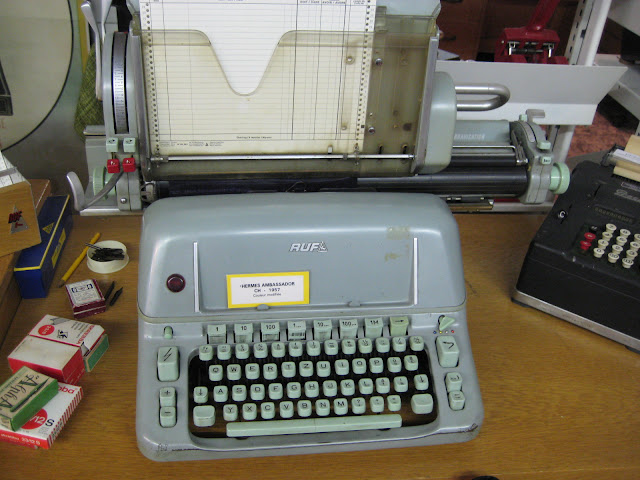 Another of his accounting typewriters was this standard Ruf - a Hermes Ambassador in all but name (it is even labeled as such). This one uses the specially-labeled sheets he had also inserted in the Continental.
Note the boxes of dip pen nibs on the left: Perrier would not admit to being a fountain pen enthusiast, but rather a collector of "everything that has to do with writing". This explained the occasional bottle of vintage fountain pen ink that I spotted in some of his display cabinets. 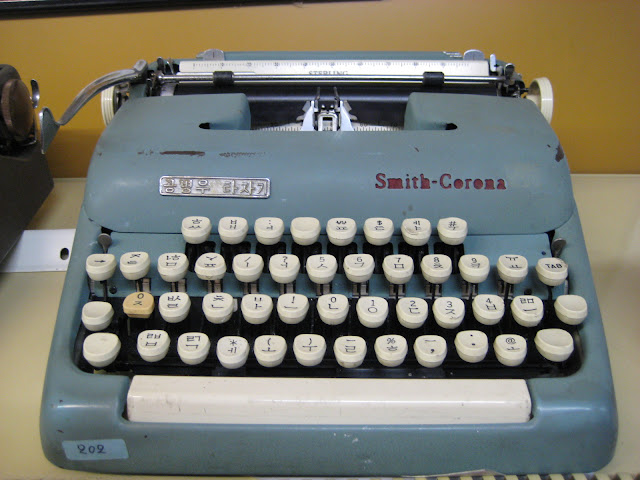 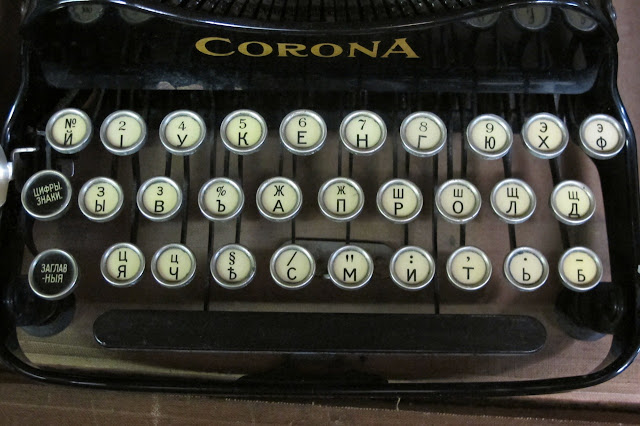 The keyboard of a Cyrillic folding Corona 3. 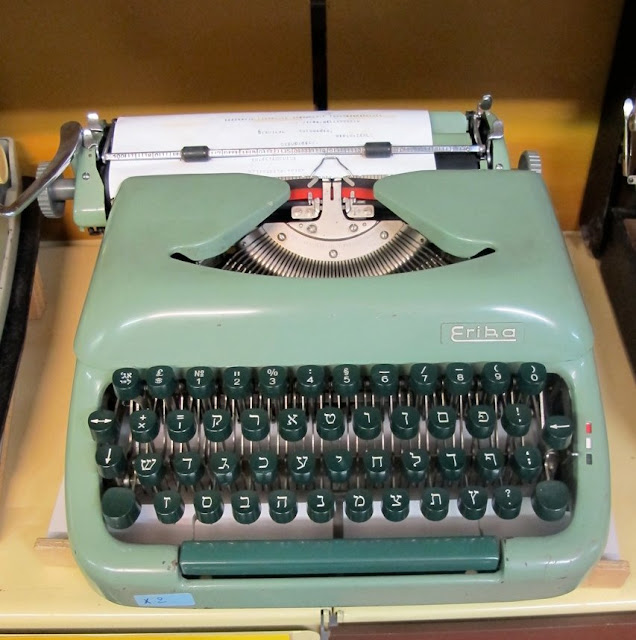 Perrier is especially proud to have acquired this Hebrew-language Erika 10, manufactured in Germany in 1947 (can you guess why?). 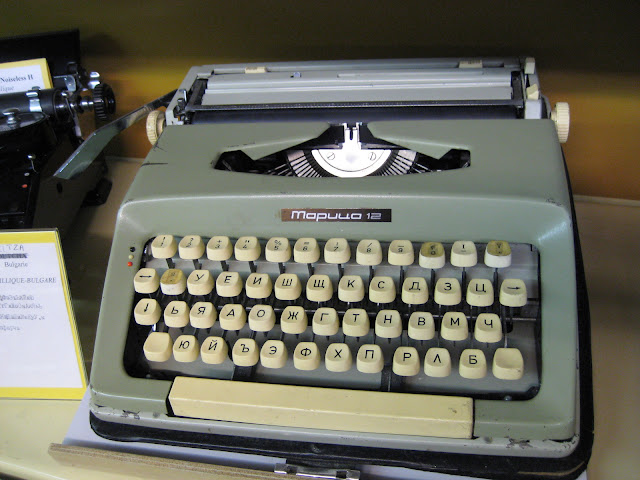 Georg discovered the sister of his new Maritsa, a Mapuua 12 with Bulgarian letters. 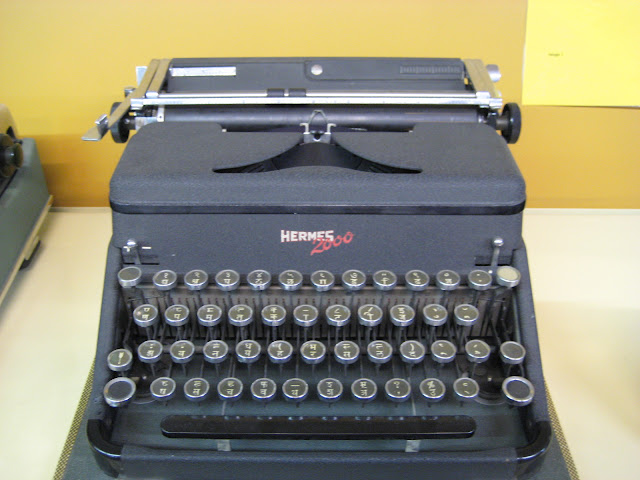 A very unusual Hermes 2000, not only because of the Hindi keyboard, but also for the glass keys, which are never found on Hermes 2000s of this vintage. We pointed this out to Perrier, but he had owned this for so long that he seemed not to realize just how uncommon it was! He did concede that the keys could have been taken from a Hermes Standard 3 or 4. 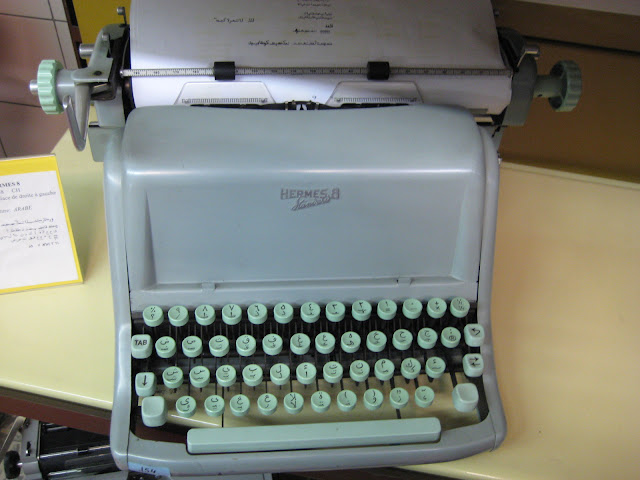 An Arabic-language Hermes Standard 8.
Well, this is plenty of pictures for one post! I shall save the rest for Part 2, in which we discover the Hermes section, explore the other unusual typewriters, and find out about Monsieur Perrier's extraordinarily generous gesture...
***All photos courtesy of the Perrier Typewriter Collection in Lausanne; photographed by Georg Sommeregger and myself.***
Posted by Adwoa at 1:35 PM
Labels: Eye Candy