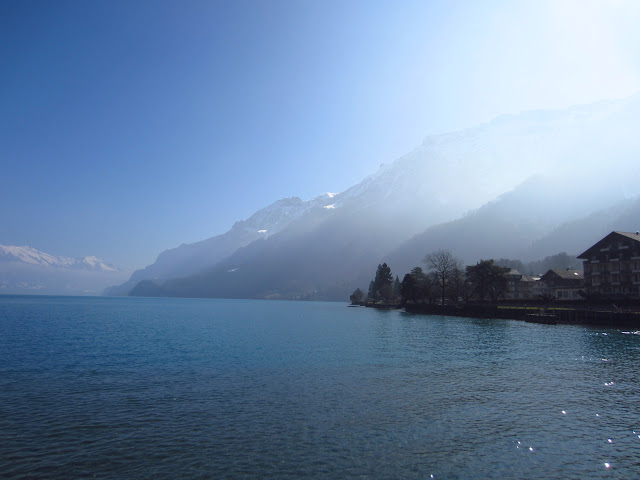 Spring is slow in coming this year, as I regrettably found out when I spent Easter break in Interlaken only to have decidedly unspringlike weather most of the time: rain, mist, sleet, and snow. I had planned to go up the mountains to sightsee (nothing too strenuous; lots of cable cars had been envisaged) - but with the awful visibility I realized my short weekend was better spent in other pursuits. Of course, the morning I was leaving, the clouds cleared somewhat and we got a glimpse of the mountains for the first time. Sigh. 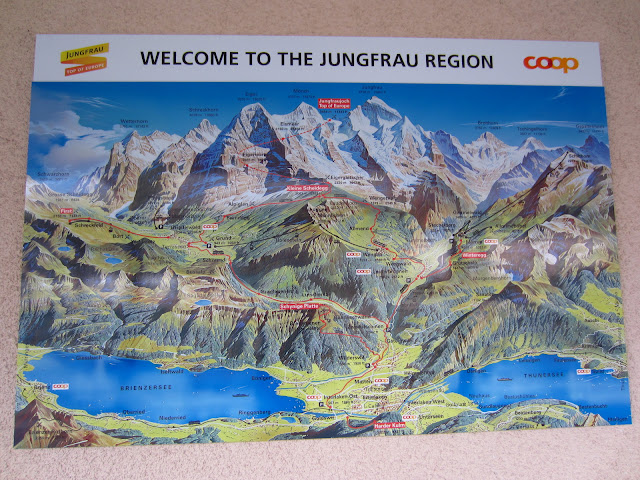 Instead of going up any of the mountains pictured in this helpful diagram, we thought it best to spend Easter Saturday - the one working day of the break - shopping in Bern and seeing whether any thrift stores were open. It turned out to be an epic day... and I have so many typewriter sightings to share! 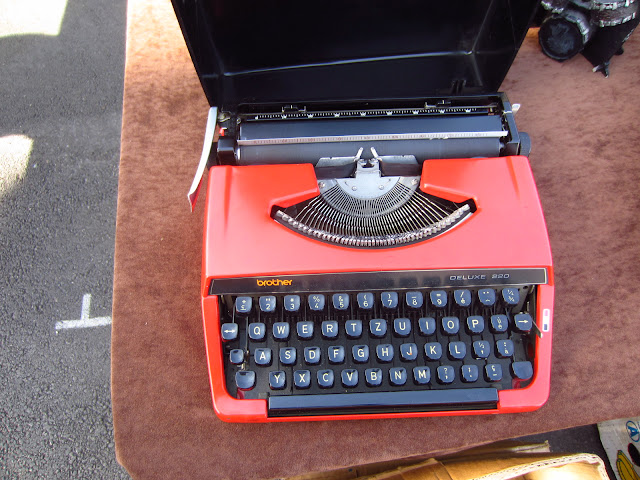 As I organized my pictures, I realized I had a few minor sightings from Geneva that had not yet shown up on the blog, so in the interests of thoroughness, I shall add them on here now. This will make for an extra long post with lots of images, so make sure you're comfortable and hydrated!

The Brother 220 above (techno, I believe) showed up at our flea market a couple of weeks ago. 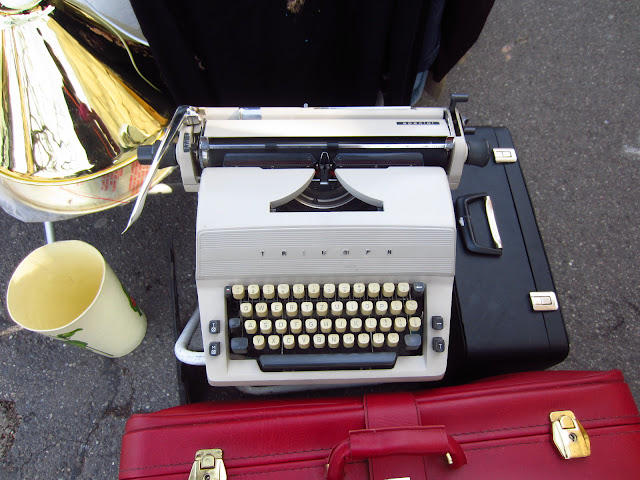 That same day we came across this hulking Triumph Special - nothing special, don't be fooled. All that plastic... ugh, '70s typewriters. 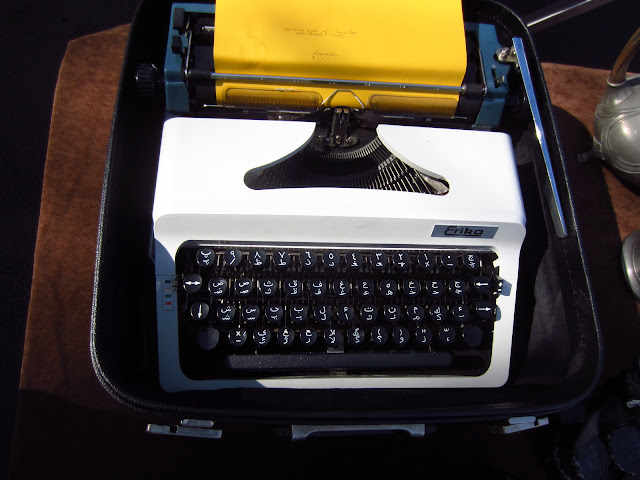 Normally this plastic Erika would provoke the same flippant response I had to the Triumph - but in Arabic? Not something one sees everyday. Lovely. Another look: 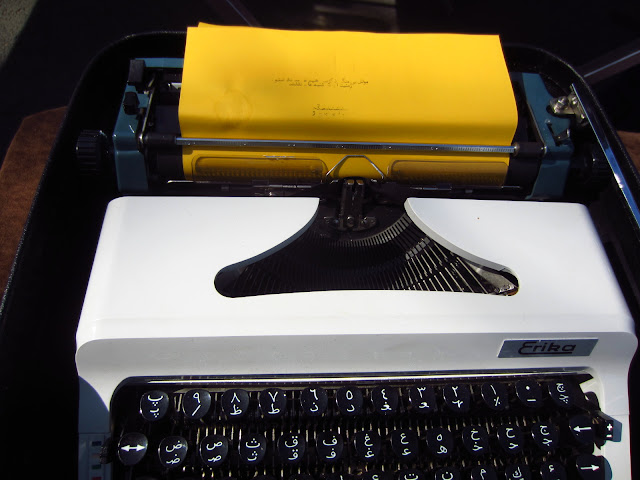 Ok, on to the Bern sightings now. We stumbled upon a thrift store in Interlaken, and of course we had to browse and see if there were any typewriters! We weren't disappointed: 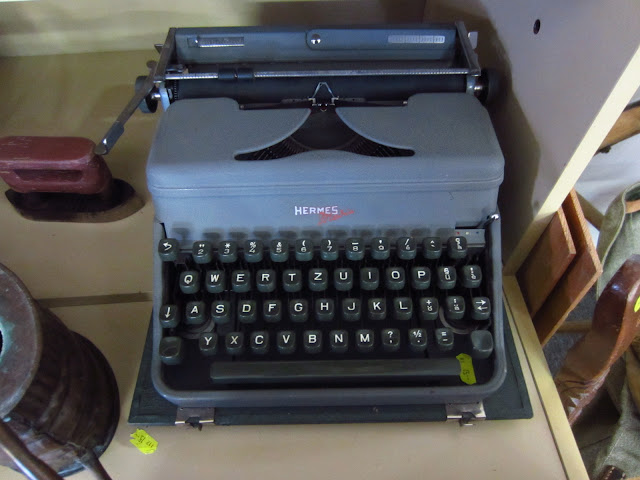 Rather ordinary - a Hermes Media, a tad overpriced at CHF 45. 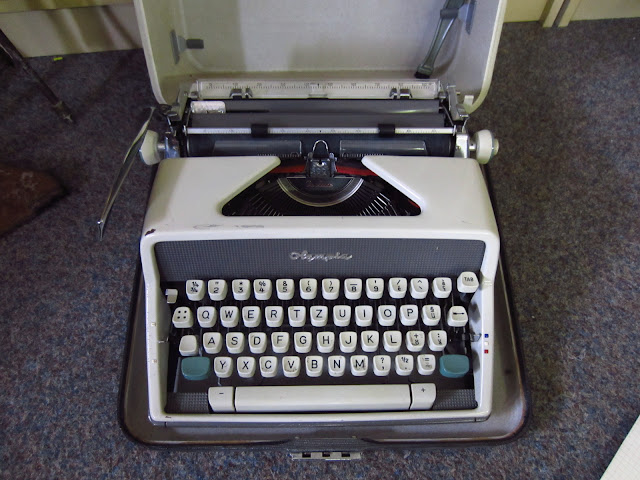 Pleasant surprise - Olympia SM-7 with senatorial (techno) typeface: first time I've seen one of these in the wild. 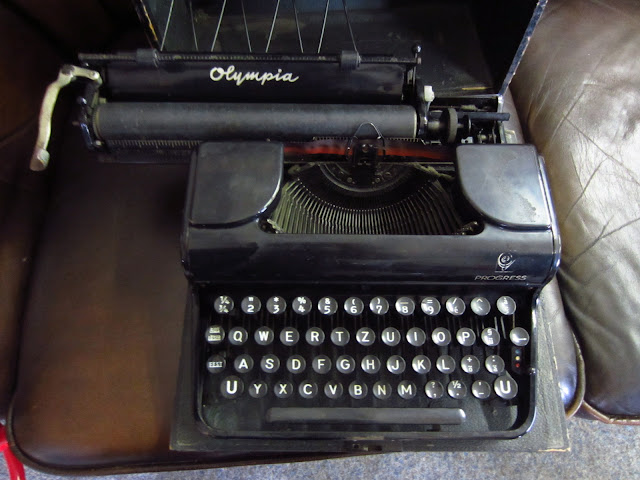 Sad tale: Olympia Progress that would not keep its carriage in the center for love or money. It kept swinging back wildly to the other side each time I pulled it into position. No time to diagnose the problem, so I moved on - nice sighting, though, first time seeing one of these also. 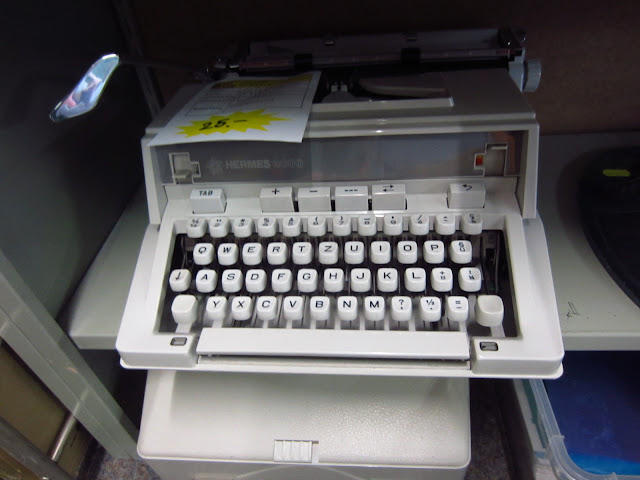 Exceedingly ordinary: Hermes 3000 from the late '70s with techno typeface. Came with a warranty, though - a pretty good deal for CHF25. 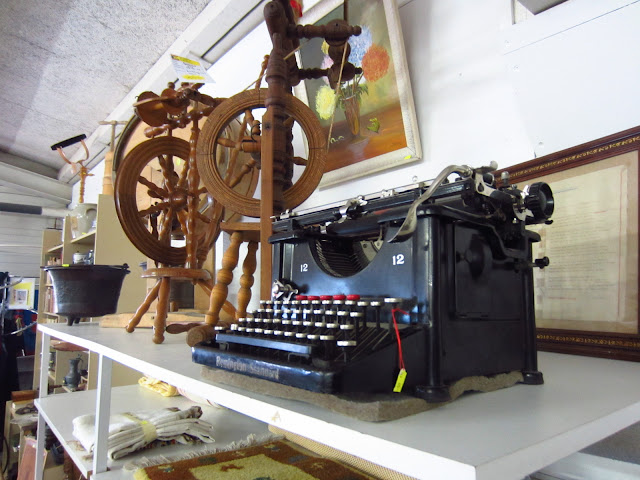 Beautifully photogenic: this Remington Standard 12, going for CHF 65. Here's what it looked like from the front - 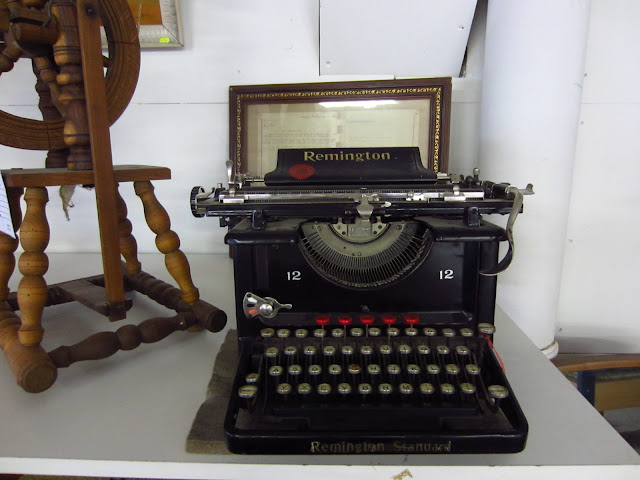 And now, the one that got away: 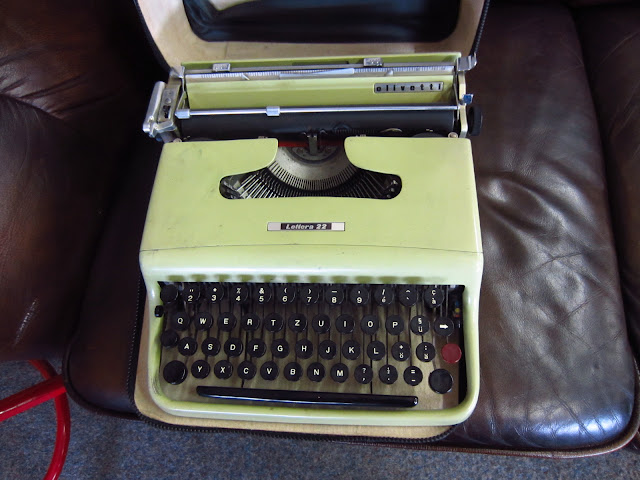 A mint-green Lettera 22 with print style typeface! For only CHF 15, this was such a good deal, and I was sad to leave it behind. I almost went back for it on Easter Monday as I was leaving, but the store was closed. Whew. 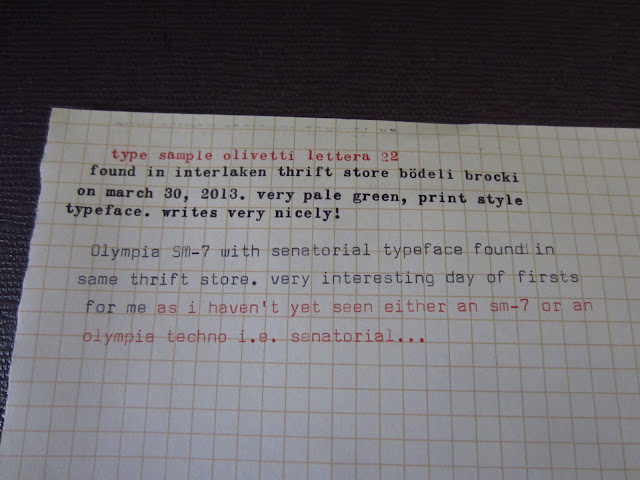 I didn't fail to take type samples, though. 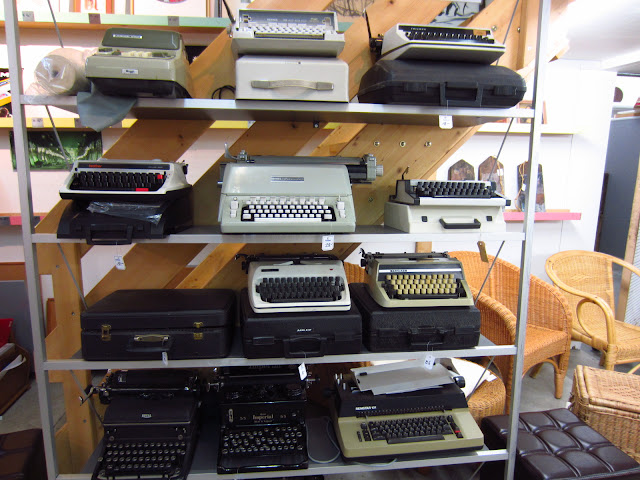 In Bern proper, we found that one of our usual thrift store haunts had come up with a nifty dedicated typewriter display. Wow! A welcome development - I hope this is in response to increased demand. I took solo shots of some of these: 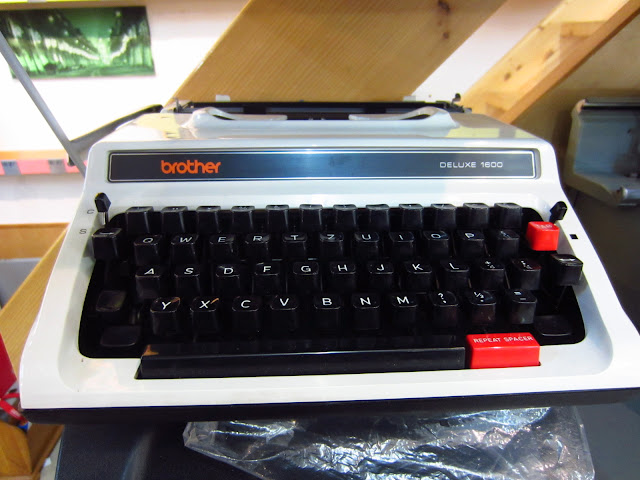 Brother Deluxe 1600 -in very good condition, if not especially remarkable. 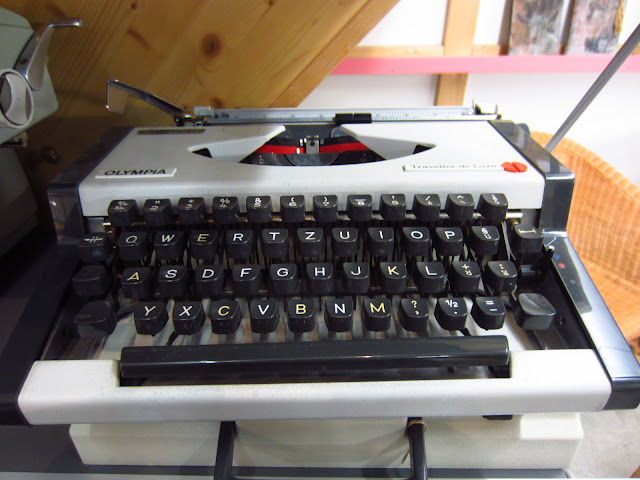 Olympia Traveller de Luxe - I had a look under the hood to see if it was perhaps script, but no luck. I used to have one of these and certainly don't miss it! 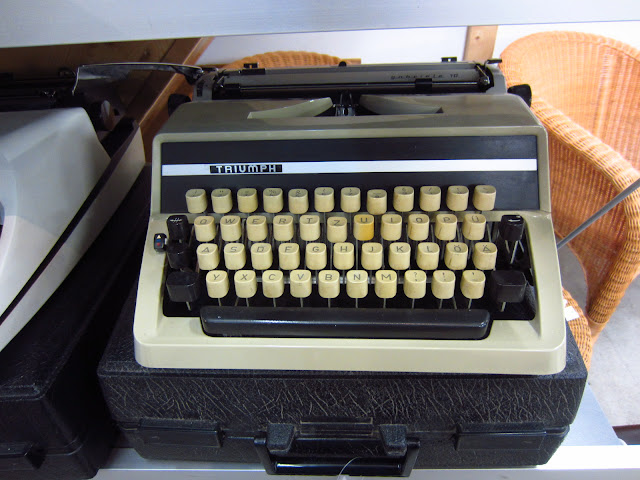 Triumph Gabriele 10 - I've seen a few of these over the years, but this one is styled a bit differently than others I've come across. 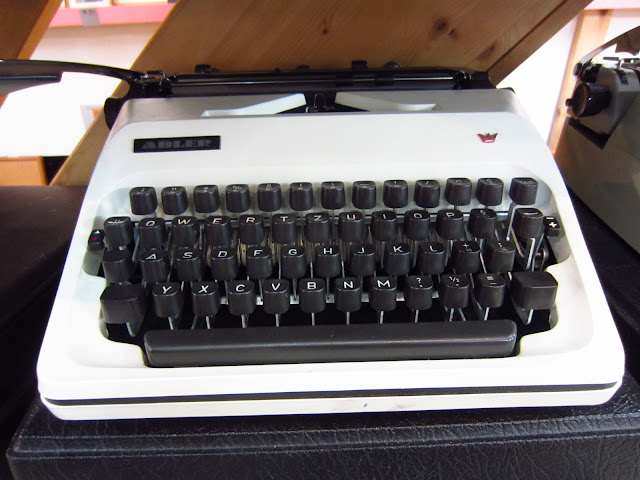 A late '70s Adler - note how the keys are the same size and shape of the Triumph above; they definitely share a family resemblance. 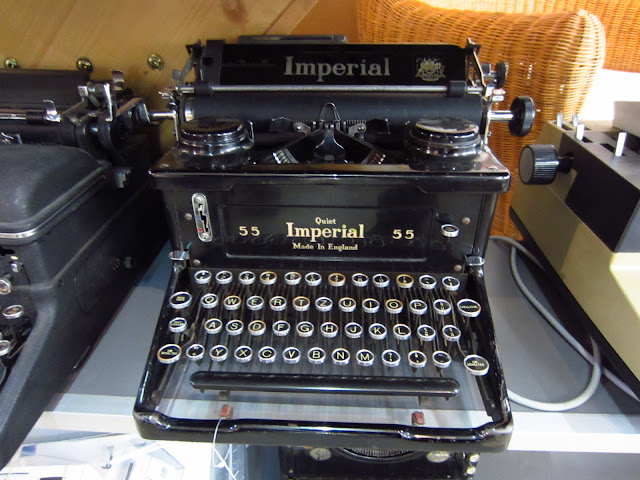 Shiny! And really just stunning, down to the keys and decals. An Imperial "Quiet" 55. 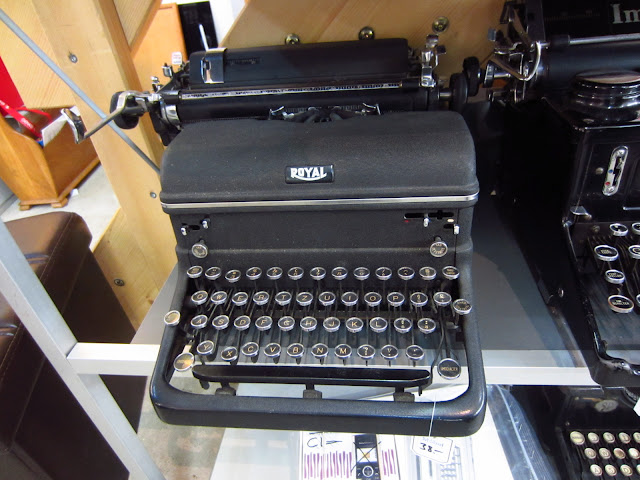 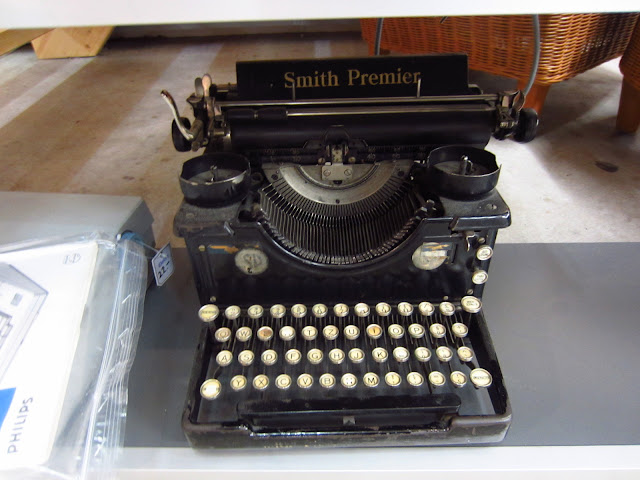 And, on the last shelf, a Smith Premier standard. 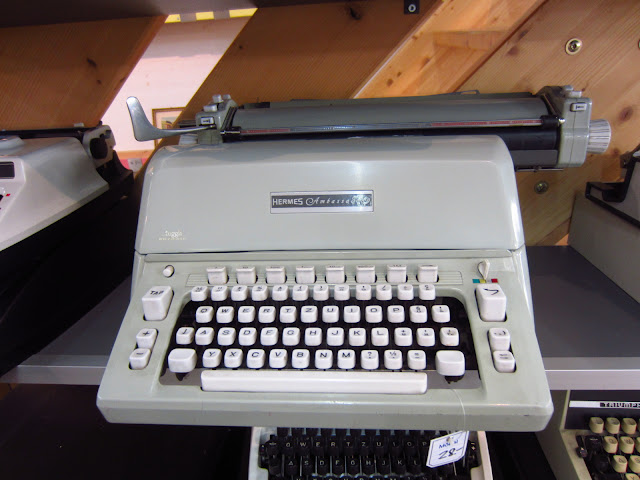 A Hermes Ambassador - not much to say, fairly predictable. 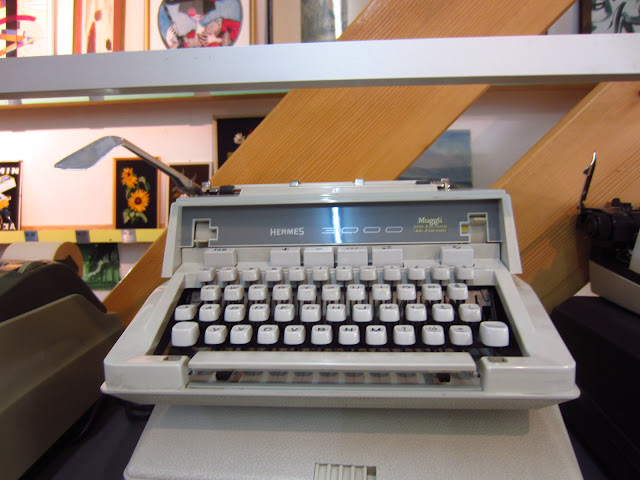 But perhaps not as predictable as this late '70s Hermes 3000; this was the second sighting on that day. 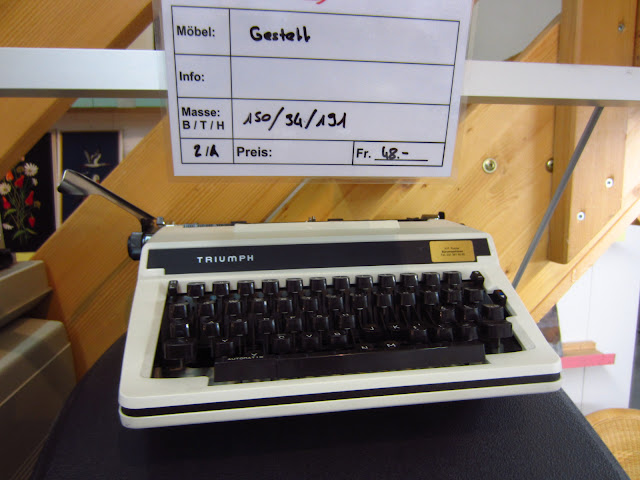 Another plastic Triumph - some office must have been cleaning out closets that had last been opened in the '80s... 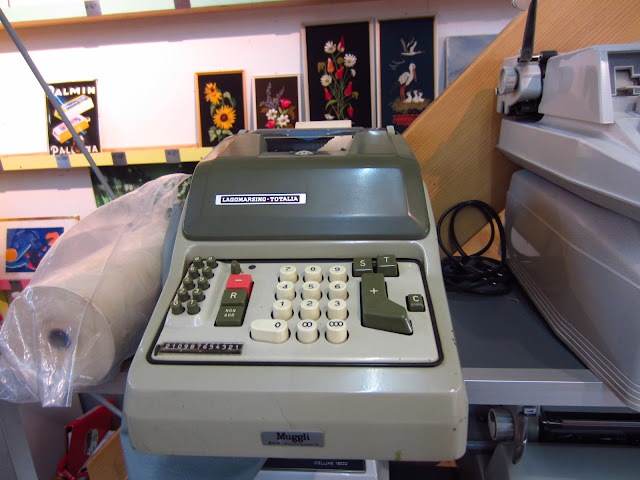 For a change of pace, a Lagomarsino-Totalia adding machine.


--- Whew, so many more pictures to go! Just as many as I have already posted. Well, there will need to be a part 2 because this post is already pretty picture-heavy. Watch out for the rest later this week: the best is yet to come!
Posted by Adwoa at 11:02 PM